History of the Lakeside Event

Hang gliding first appeared in the Columbia Valley when Harley Portman, a multiple Canadian champion water skier moved to the valley with a tow kite. The story goes that after a night in the White House bets were placed and the next morning a bleary eyed Portman and entourage snowmobiled up to the the top of Mount Swansea (which had a fire watch station on top). From its 5600’ ASL (2800’GSL) summit he flew his tow kite complete with stainless steel control bar landing unscathed at the bottom. This was the first of millions of launches off Swansea.

1975 saw the first cross country flight from Swansea- 17 miles to Fairmont in a Quicksilver, blown downwind in a storm cell. Randy Haney set Canada’s foot launched distance record. He flew from Golden, BC to the Eureka Mountains in 10 .5 hours. He flew more than 200miles but had to turn back north to land by a street light since it was so dark. He was only awarded 197 miles!! 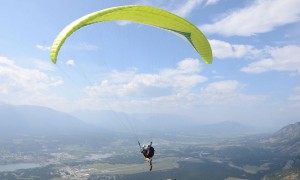 Also in 1975, Barry Howie started Eagle Delta Kites in Athalmer (Invermere). Starting with 17-18’ Standard Rogallo’s, Barry progressed to copying more high performance gliders-the Fox (Cirrus III) and the very successful Cloud (Eipper Cumulus V) a truncated glider that Team Kupchanko flew to a Silver Medal a the first worlds meet in Kossen, Austria in 1976. 80% of pilots on the Canadian National Team that first year, were from the Invermere Area. When the boys arrived home, it was reason to party which we did very well!! 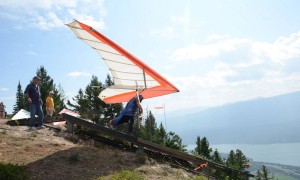 On a Saturday night in September when most of the tourists were gone, 20 local pilots, friends and business men assembled at the Lakeside Inn, where the pilots and their skills were auctioned off and all the money was put into a pot. Like a Calcutta, the money was split 60, 25,15 with the cash going to whoever “owned” the winning pilot. The contest was a flight off Mount Swansea, across the valley (no small feat on it own with the gliders of the time) and hit a target (inner tube) enclosed in waist deep water beside the Lakeside Inn. The winners that first year were (1)Bruce Robinson, (2) Jeff Blake, (3) Barry Howie.
There followed a huge party in the Bar at the Lakeside on Sunday (long before Sunday bar openings).

Since that first contest, the event became an annual contest making it to the author’s knowledge the longest continuously running Hang gliding event in Canada- one of only a handful running more than a quarter century in North America and certainly unique in the one flight water landing.

The following are a few highlights that have occurred over the years:

1979 The contest was open only to local pilots. It took Dano and Jim Catley two years of summer living and flying here to get local status and be allowed to complete. Local Parachutists jumped from a helicopter and went for the target.

1986 The American Cup was in the valley. The cup had the 6 best teams from the previous World championships with 6 man teams (36 pilots) from Canada, US, Australia, Great Britain, Germany and Brazil. We decided to hold the Lakeside Event on the August long weekend to include these world class pilots. Spectators still talk about the formation aerobatic display put on by the Aussies.

1987 Due to popular demand we kept the contest date in August for spectator involvement and went high profile with P.A. systems, entertainment and always sunshine and flyable conditions. The event has always been held on the same weekend in August ever since then.

1992 First tandem flight to the Lake by Larry Strom who has the most names on the trophy.

1995 19th year and first year Paraglider pilots participated in the event. The performance of Paragliders prior to this made it improbable to make the lake.

1996 20th annual Event was hugh with more than 50 entries from all over Canada and the northwest USA. We have always had visiting pilots enter from all over the globe who have been in the area, heard about this bizarre event and “killer” party. This was the first year that we had a paragliding category with target landing and prize money. There was $2000.00 cash for placements.

1997 The 21st year. We moved the event to the west end of the park to get away from the obstacles and congestion. The close calls over the years were getting too much for an old guy like me!

1998 The 22nd year. The Lakeside Inn was burned down and closed. So the party, all three days, moved to Dano and Julie Saunder’s home. Feeding 100 plus persons, sit down at tables in your yard is no small feast.

2001 25th annual event. Again a hugely successful event with forty pilots- paragliding pilots outnumbered the hang gliding pilots. It was the biggest year yet for spectator turnout. The price money was $2000.00 which was donated by a local business. Hang gliders were slung to the top of Mt. Swansea to avoid “the hike” for us old hangies.

2002 After 19 years of organizing and hosting this event, Julie and I are stepping back and handing the lead reigns to Frank Kernick , Max Fanderl and John McIsaac and the most capable team that they have assembled. We want to thank the countless people both the volunteers and sponsors who have helped make this event possible for us to host over all these years. There is a regular core group of volunteers who have been here meet after meet offering their time and experience to help new people who are always coming in.

2003 80 pilots showed up and if the fires situation had not been, we would have had over 100 pilots. The crowd was great and we had a lot of entertainment with flying, ground handling demos and a Mr. And Mrs. Lakeside competition.
The drop in party was a very successful turn out. We had over 200 people enjoying the free beer (3 keg’s) and bratwurst and live music from Brian (Cello), Marissa (Violin) and John (drums). Besides the Music, Bratwurst and Beer we had it was great to have the equipment expo with Paraglide Canada, Muller Wind Sports, SkyRide Aviation. The awards and party was at the Lakeside Pub with a great buffet and dance with the TR3 Band.

2004 this was the second event in history where we had to fly at the “Rain Day” The weather at the drop in-party was holding up and we had a great time with free Bratwurst, free Beer an an amazing concert from Brian (Cello), Marissa (Violin) and John (drums). Early Saturday morning the rain moved in and we had to postpone the event to Sunday. The only guy who got a lot of flying hours was max in the afternoon with his Airborne Trike. The evening was held with a Buffet at the Lakeside and the Live Band “Cronics”. We still had 62 registered Pilots due the bad weather report and the Saturday weather. Sunday turned out to be one of the best conditions we have seen for a long time. Very smooth light thermals. Every Paraglider and Hang glider made it to the lake and had a great time.

The 29th Lakeside splashown began with a free keg party at the Invermere airport, with a live band, and the partying continued well past midnight. So it might have been a bit hard for some of the hang glider pilots to get up at 7:30 and get their gliders ready for a helicopter airlift to the summit of Mt. Swansea. A few slept in and had to walk up, as did all of the paraglider pilots.

After a pancake breakfast, registration, and pilot meeting, most pilots were on top by noon. The lake was calm, but at summit-top level there was a 30 km/h wind blowing. Four or five PG pilots got off, and the launch quality steadily declined. After the fifth pilot took and sat motionless for 3 or 4 seconds, I decided to walk down and wait out the wind on the beach. So did many other pilots, and the PG contest was called off at 3pm. But the HG pilots were able to launch, and penetrate, so their contest was on.

By 4 pm, Bruce Hansen was gleefully proclaiming his victory, with a landing 2 ft from the bullseye. Martin Quinn was right behind him, with a 3 ft distance. No one else launched for an hour, luckily, as for a few minutes a small gust front blew through, then the wind switched from S-SE to S-SW. Finally it died off and went north. And then Eric Oddy launched, the last pilot off the mountain. Down he came in the oldest glider in the meet, a Comet 1 with extensive duct tape on the leading edge pockets. Tihi wound the crowd up by announcing that it is not over until the fat lady sings. And it wasn,t. Eric came over the water, headed toward the target a little high – way high. But when he was over the target at 20 ft, he flared, and dropped down that full distance right into the inner tube! If he had done that over land, he would have broken his legs, but water is forgiving. Anyway, Eric got $500 for his efforts, so now he can afford to retire his glider.

Sunday report from Lakeside Event organizers
On Sunday the Pilots meet was at 8:00 am and the first pilots where in the air by 9:30 am. Sunday was a perfect day and all pilots could make it to the beach. This years first price went to Eric Oddy and to Glen Derouin. Eric Oddy is the first person winning both categories. Well Done Eric. We also would like to mention that James McGilvery is the a volunteer for 29 year and this year it was his first time competing in the Paraglider category landing in the water.

2008 The weather was perfect until the afternoon. All paraglider pilots could do one round and the hang glider pilots who where waiting for better conditions ended up driving down due a big thunderstorm development. The party on the evening was a blast again. For people who did not come, certainly missed a good one. Make sure to come to the next one.

2016 marks the 40th year running of the Lakeside Event.  Rainy weather slowed down flying on Saturday – good thing there were so many great people to party with at Frank’s house! Those who were able to stick around for Sunday had beautiful flying conditions and enjoyed the return of the sunshine.

2017 Lakeside Event sunny and hot!  Beautiful flying conditions with many pilots, friends, and spectators.  A very successful event again and we thank you all for participating, encouraging and celebrating with us the beauty of the Columbia Valley and our flying community! See you next year!

2018 Lakeside Event was the windy and stormy. This was the first time ever we had to cancel the event due winds of up to 100 km/hr and lots of smoke due the forest fires. Thanks again for everyone coming and celebrating this event.